A historical snapshot of the Auburn Police Department 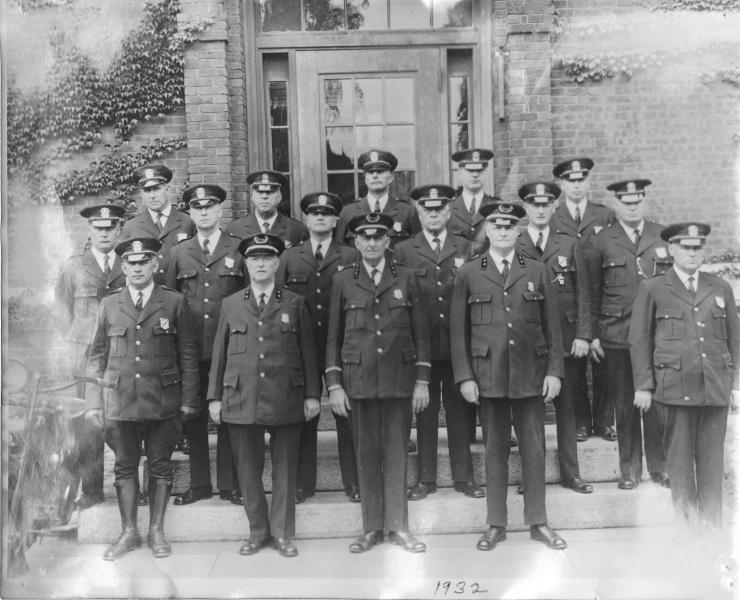 The Auburn Police Department began in the late 1800's with one night watchman. By the 1930’s, the force was primarily made up of Constables. The “police men” in 1898-9 were Harry C. Benson, Fred L. Austin, Samuel Ratcliffe, Charles Small and Guy A. Wilkins.

The area of the City of Auburn roughly covers 65 square miles. It is approximately 12 miles long extending 6 miles above the falls and 6 miles below. On average, Auburn is 4.5 miles wide. It is comprised of the following areas:

1869: Joseph Littlefield was the last constable prior to the City of Auburn, Joseph Hall was the first night police force member and Charles Davis was the first Special Police Officer/Night Watchman.

1876 (Oct): Police were permitted to build and man a guardhouse near the covered in bridge in the Barkers Mills District (today New Auburn). The total cost was not to exceed $50. A Special Police Officer was assigned to the Oak Hill Cemetery. There was one "Sunday officer" and there were four "day police" who had regular beats.

1894: The APD adopted the use of a special police matron (Maria M. Swett). The idea was that she could make incidents, including arrests, less stressful for women and children. She also served as a social welfare worker long before the job was common. She searched females and children, sat with them while arrested and provided community awareness about the less fortunate. Pay rates for the Police Department were as follows; Chief $70/month, Patrolman $60/month and Police Matron $200/year (on average $16.67/month). No more than six officers were allowed to be employed by the department.

1921: APD purchased the first motorcycle for the department. It had been previously approved but the cost was prohibitive.

1932: Auburn's first motorcycle officer. Intoxication was the violation with the most arrests. This was blamed primarily on the number of illegal stills located in and around Auburn. [The State of Maine was a dry state from 1851 until 1934. It was the first dry state in the nation.] A scout car was purchased and liquor arrests went up 90% in less than a year. The second most common reason for arrest was vagrancy/transient workers due to the “Quoddy” Project in Eastport. This was a tidal power project in Eastport and many people came through Auburn on their way to Eastport.

1936: The APD is credited for saving numerous lives during the burning of New Auburn which apparently began in Pontibrand’s garage. APD purchased its first boat and trailer which was used for rescue operations on the Androscoggin River and nearby lakes.

1938: Chief Herrick organized a snowshoe patrol to check on cottages at Taylor Pond.

1950's: APD officers worked the scene of a train wreck for three days on Hampshire Street near where the Beal Laundry and Denny’s are located today. The wreck stretched from Hampshire Street to Court Street.

1951-1952: Officer ranks were established so there could be a superior officer on duty at all times. During that same period, Auburn had three cars and one truck in service.

1960: The last Gamewell Traffic Signal was used in Auburn. When traffic signals were first introduced in Auburn, there were many complaints that drivers had to sit at red signals even if no other traffic was present. To solve this problem, Gamewell Traffic Signals were introduced so an officer could go to the call box and relay a signal to have the light change from red to green. The last traffic box was located at Court and Main. There are still Gamewell boxes located throughout Auburn.

1964: The APD was the FIRST local law enforcement agency to adopt the use of walkie-talkies to communicate both intra-agency and inter-agency (with Maine State Police). Prior to radios, if there was a major issue where an officer needed assistance, he would run to a call box, phone in for help, then run back to the scene hoping that help arrived swiftly.

Underwater Search and Recovery Team was organized and lead by Sgt. Norman Spencer and Sgt. Roger Ouellette - both of whom were expert scuba divers. The team traveled throughout the state, assisting other departments that had no team. They even responded to Moosehead Lake where the team worked at a depth of 80 feet to recover three swimmers.

1965: Auburn PD installed a teletype system so it could send/receive statewide and nationwide alerts and messages rapidly.

1987: The APD had 46 full time and 3 part-time police department personnel. Of those, 44 were sworn and 5 were civilian.