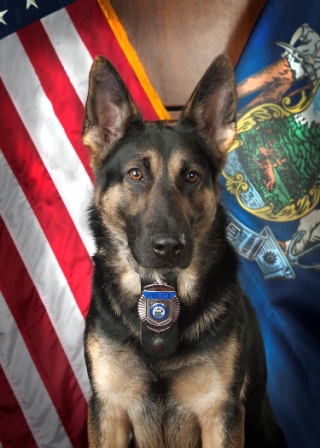 “Rocky,” a black and tan German shepherd, is named in honor of Auburn Police Officer Rodney “Rocky” Bonney, who was killed in the line of duty on April 6, 1981. Officer Bonney’s widow, Cherrie, got to meet her husband’s namesake for the first time when Rocky was sworn-in before Auburn’s City Council, and she very proudly ‘pinned’ his badge during the ceremony.

Rocky retired from service during a private ceremony held on December 29, 2021. This exceptional K9 faithfully served the citizens of Auburn as a dual-purpose narcotics/patrol dog partnered with Officer Donald Cousins.

During his 8-year career, this extraordinary dog has been deployed a total of 345 times; for tracks, drug detection, building searches, article searches and apprehensions. And his results have been impressive.

Working side-by-side with his partner, Rocky has successfully tracked and located 25 suspects and missing juveniles. On 52 occasions, he discovered narcotics/narcotic paraphernalia, helping the APD to get more than 533 grams (1/2 kilo) of drugs off our streets. He has earned a success rate of 30% of his deployments, which is incredible performance by a K9.

K9 Rocky has assisted in the investigation of burglaries and robberies, locating items of evidence. He has also helped stop crimes in progress, and he has deterred aggressive subjects that wanted to fight - until they saw or heard him. In 2016, K9 Rocky earned the first ever Colton Guay Award during patrol school at the Maine Criminal Justice Academy. And he and Officer Cousins have been true ambassadors of the Auburn PD, attending countless community events and K9 demonstrations, connecting with the people (especially the kids) of this community.

In his well-deserved retirement, K9 Rocky will continue to live with Officer Cousins and his family. 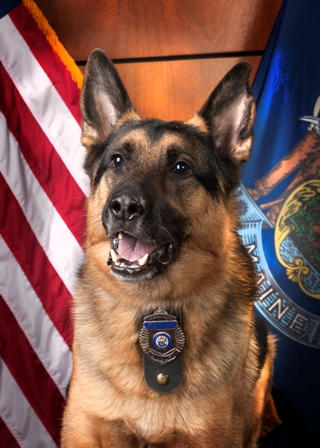 K-9 Officer Dutch was born in Canada on March 9, 2009. He is a black and tan pure-bred German Shepherd.

Dutch was purchased after a donated dog, Gunner, failed to have the proper traits needed to be a police K-9. His handler, Sergeant Kristopher Bouchard was 2 weeks into a 12 week Patrol School when it became apparent that Gunner would not make the cut. Dutch was purchased as a replacement using drug forfeiture money in March of 2010. Gunner found a home in the Skowhegan area with a civilian. Even though there was only 9 weeks left when Dutch began the training, he passed with flying colors. In fact, during a rugged terrain tracking exercise at Frye Mountain in Montville, Dutch was the only K-9 to find the person he was looking for after a track that was over a mile long, up the mountain. During patrol training, K-9s are trained in obedience, tracking, evidence searches, building searches, aggression and officer protection.

In September of 2010, Sergeant Bouchard and Dutch attended Narcotics Detection School, spending 8 weeks at the Maine Criminal Justice Academy. During this school, Dutch was trained to detect marijuana, hash, cocaine, crack cocaine, methamphetamine and heroin. The training took place in various locations that included searches in buildings, on boats, in vehicles and at airports. Sergeant Bouchard and Dutch successfully completed this training and graduated in November of 2010.

On the streets, this K-9 team was utilized by the Auburn PD as well as surrounding departments. They were used on a regular basis for tracking suspects and searching for drugs in vehicles, residences, correctional facilities and schools. The team also conducted demonstrations for many community organizations.

Dutch is a social dog who loves attention and enjoys work and play equally. He resides with Sergeant Bouchard and his family in Auburn and is loving his retirement life! 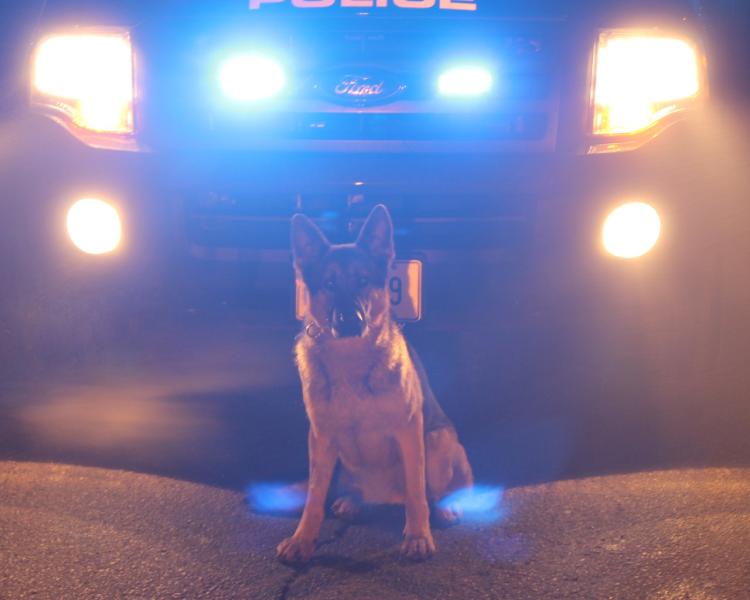 Inka was one of APD's two original K9 officers; she was retired from duty in 2013.

Inka was born in New York on May 9, 2005. She was a pure-bred female German Shepherd that was trained in the dog training art of Schuetzen. Inka began her tour of duty on March 20, 2007 at the Maine Criminal Justice Academy (MCJA) K-9 Patrol School, with her handler, Corporal Scott Corey.

Dogs come in an huge variety of shapes and sizes, and not every breed of dog is suited for police work. The key attributes of a successful police dog are intelligence, aggression, strength, and sense of smell. Inka possessed all of these, and so much more. She served our agency and this city well. She worked hard - she loved her job - and she served with heart and with courage.

Inka’s heart showed through in everything she did. She would allow the smallest child to pet her and kiss her; but she knew when it was time to work, tracking the bad guys with tenacity and ferocity. She was always right beside her handler, ready to face anything - clearing buildings, searching vehicles, wading through mud, water, woods...anything that was asked of her.

Inka lived out her well-deserved retirement with APD Patrol Officer Dennis Matthews and his family, where she was loved deeply. She was a very happy family pet, getting lots of love and attention, and romping with ‘her kids’ and her canine siblings.

We will always remember and honor Inka’s service to the Auburn Police Department.

We will always remember and honor Inka’s service to the Auburn Police Department. On behalf of a grateful community, thank you and rest easy, girl - we have it from here. Good girl.

One the APD’s two original K9 officers passed away in 2011.

Beny, a black German shepherd, proudly served the Auburn Police Department alongside his handler, Corporal Kris Bouchard, from 2007 to 2009. He was a trailblazer, serving as one of the department’s very first K9 officers. Originally from Slovakia, Beny was trained for patrol/tracking and for drug seizure. He was happily living out his well-earned retirement in Norway, Maine chasing squirrels and romping with his dog and kid friends. Rest well, Beny. We will miss you. Thank you for your service.